Blurb Blitz: gods On Trial: The Series - Beyond the Father

gods on Trial: The Series - Beyond the Father 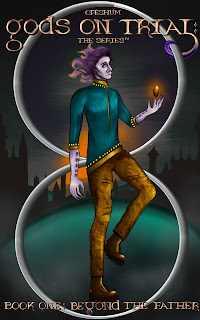 “Beyond the Father” sets the scene for the 8-book Sci-Fi Epic “gods on Trial: The Series,” delving into life’s determination to transcend all limitation.  Set on the planet Xżyber, citizens of the Sub-Median Region, imperfectly reborn into metal, oppress those who are organic.  Elsewhere, in the Central Kingdom, religion supports royalty’s brutal domination of the lowest class.  War over scarce resources is coming, revolution within each region is brewing, and none know of the eccentric god who created them. This being watches, has fascinating conversations with his often-wiser companion, occasionally learns, and rarely intervenes.  The many levels and threads of struggle distract nearly all from a far greater threat.  Meanwhile, the young Prince Anglid’s vision quest into the unexplored Area X may ultimately change everything.  However, just when you think you know the direction of the story, the author has yet another surprise.

“Fleet number, rank, and make?” asked the assignment officer at GATE 11, on the central floor of Team Command.

“Cleared. Report to HAS 4 in Field 8,” the assignment officer abruptly responded. “Next? I need Fleet number, rank, and make!”

“Thank you, yes! I’m next,” responded another cadet, rushing up to the window. Her rucksack slid off of her shoulder, where the stub of a missing arm stuck out just beyond the sleeve of her shirt. “Here are all of my papers,” the cadet said, spreading out a pile of disheveled notes.

“Hold it! I just need a fleet number, a rank and your make. I don’t need your life story,” snapped the officer.

The assignment officer studied the cadet disapprovingly. “100%—non-Mollard,” he repeated, carefully scanning the cadet’s face. “Didn’t know they still let your kind in. And who is your commanding officer?” he demanded.

The assignment officer pushed the papers back at Purvi and frowned. “I don’t need all these papers,” the officer scowled. “And I don’t need your name!”

“I see. Thank you, sir,” Purvi responded, retrieving her papers. But then she paused. “But, you’re a Non-Mollard too, aren’t you?” she pressed. “In which case . . . well, it’s just so hard connecting with anyone here. My whole fleet is mostly Mollard, and . . .”

“Why are you still talking?” the assignment officer interrupted, while entering something into his database. “You’re cleared for HAS 12 over in Field 3.”

Realizing her gestures were unwelcome, Purvi quickly repositioned her rucksack and turned to walk away. But then she turned back around and reapproached the window, consumed by what had become a theme in her life—the burning desire to challenge what she felt was wrong. “Why are you so full of hate when you are still part flesh yourself?” she challenged.

Shocked, the assignment officer slowly looked up to meet Purvi’s bold stare and revealed the circuitry behind his colorless, prosthetic eyes. “How dare you talk to me that way, you little ‘scunt!” he seemed to growl through clench teeth. “How dare you even open your mouth to speak to me without being asked a question? You remind me of everything that shouldn’t be. You’re an unfortunate arrangement of flesh and mineral—with a mouth!” Growing even more impatient, the assignment officer stood up quickly from his chair. “You are just a waste and a burden to us all. Your kind shouldn’t even be here,” he sneered, leaning forward to make his point. “Make no error in. I am part of the new Xżyber and you’re . . . you’re completely expendable.” His voice became deeper, as did his frown. “Now get out of my line!”

Opëshum has been writing since she was a child, and believes that authors are selected by their characters to bring their stories to the world. Incredibly shy and introverted, Opëshum does not make public appearances. She prefers to remain behind the scenes as the characters in her books take center stage. Her current work, the 8-Book SciFi Epic gods on Trial: The Series™ kicks off with Book 1, BEYOND THE FATHER.

Opëshum calls Sheridan, Wyoming her home, where she is currently writing Book 2 of this series. She lives in a modest Cape Cod dwelling on 3 acres of land where she lets a robust variety of sunflowers grow wild and untamed, while Aloe Vera and other succulents decorate almost every ledge within her house. An avid writer in the early morning and late at night, Opëshum often works on her manuscripts in rooms lit only by homemade candles.

She enjoys nature walks, full moons, and open spaces where she can stare up at the stars.

"I live my life in the shadows, and I am shy. For I know that my appearance is not pleasing to the eye." - Opëshum Patroz

Opeshum Patroz will be awarding a $50 Amazon or Barnes and Noble GC to a randomly drawn winner via rafflecopter during the tour.

Enter to win a $50 Amazon/BN GC - a Rafflecopter giveaway