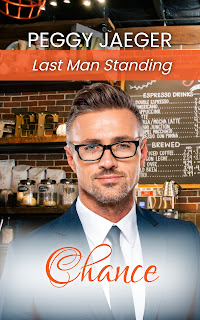 You know who he is... the confirmed bachelor. The fellow who claims no woman will ever tempt him enough to succumb. Cupid will never hit his mark.

Well, guess what? We’ve got fourteen feisty heroines who are about to change their minds.

Chance Miller, divorce lawyer extraordinaire, knows the whole happily ever after dream is an urban myth. He deals with miserable and wedded warring couples every day and swears staying single keeps him sane and happy. His friends and family consider him the last single man standing and fear he’ll never find someone and settle down. But Chance relishes his carefree status and unencumbered lifestyle and has no plans to change anything.  If only his relatives would stop trying to set him up with their version of the perfect woman.  Fredrika Poole already experienced her one great love, and the widow can’t read any future romance in her tea leaves. She’s content to bake, run her business, and care for her daughter.  When Chance meets Freddie and discovers her marriage thoughts run on the same road his do, he realizes she’s the answer to his prayer for keeping the relatives at bay. But the pixie barista has a way of making Chance question everything he’s always thought about love, marriage, and wedded bliss.  Will his last man standing status go unchallenged? Or will Freddie be the one woman he wants…but can never have?

Chance opened his eyes and before he could look down and assess the damage done to his clothing found a pair of the most beautiful green eyes he’d ever seen gazing at him with worry creasing a perfect brow. A halo of copper-colored hair sat secured in a high ponytail, a pencil sticking out of the center of the knot. Skin the color of pale cream glowed with health. A tiny depression in the center of the chin was so unexpected Chance found himself staring at it for a few beats before he lifted his gaze back to her eyes.

“I can’t believe she threw her coffee at you,” the woman said, shaking her head. She slammed a fist on her hip. “What a waste of six bucks. Thank goodness it was a cold brew. Here,” she shoved a stack of napkins at him. “I don’t have a proper towel to give you.  I still need to get supplies in. These will help, though, sop some of it up.”

The notion he should take the napkins drifted across his mind but he couldn’t manage to get his hands working. He was simply unable to do anything but stare at her. Covered in baggy blue overalls with a stark white t-shirt under then and white sneakers on her feet, she was the furthest thing from the type of woman he was usually drawn to. Six-foot models who were looking for a night on the town and free champagne cocktails were more his speed. But there was something so indescribably alluring about this woman dressed in clothes that did nothing for her, he simply couldn’t take his eyes off her.

A tiny head tilt as she stared at him and the subsequent slide of her ponytail to the side propelled Chance out of his stunned stupor. Blinking like he had ten eyelashes stuck under his lid he shook his head a few times then took the proffered napkins with a simple, “Thanks.”

While he began patting at his assuredly ruined suit, she asked, “Friend of yours?”

He barked out a laugh. “Hardly.” 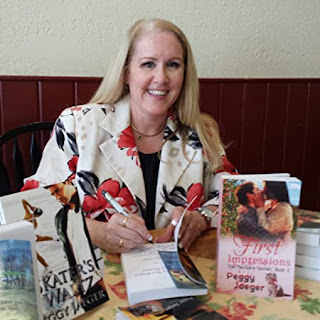 I'm a contemporary romance writer who writes RomComs about strong women, the families who support them, and the men who can’t live without them. If I can make you cry on one page and bring you out of tears rolling with laughter the next, I've done my job as a writer!

Family and food play huge roles in my stories because I believe there is nothing that holds a family structure together like sharing a meal…or two…or ten. Dotted with humor and characters that are as real as they are loving, I bring all topics of daily life into my stories: life, death, sibling rivalry, illness and the desire for everyone to find their own happily ever after. Growing up the only child of divorced parents I longed for sisters, brothers and a family that vowed to stick together no matter what came their way. Through my books, I've created the families I wanted as that lonely child.

As a lifelong diarist, I caught the blogging bug early on, and you can visit me at on my website where I'm blogging about life, writing, and stuff that makes me go "What??!" daily.

The authors will be awarding a $20 Amazon/BN GC to a randomly drawn host via Rafflecopter. Please use the code below.

Enter to win a $20 Amazon/BN GC – a Rafflecopter giveaway