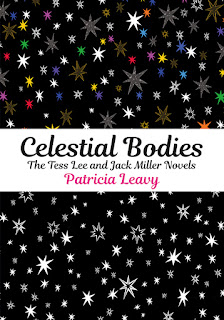 Heart-warming and wonderfully romantic, written with the sharp wit of Candace Bushnell and the sensitivity of Meg Donahue, comes best-selling author Patricia Leavy’s tour de force about learning to balance darkness and light in our lives.

Celestial Bodies is a series of six novels that follow the epic romance of Tess and Jack: Shooting Stars, Twinkle, Constellations, Supernova, North Star, and Stardust. An exploration of the power of love, each novel focuses on love at the intersection of another topic: healing, doubt, intimacy, trust, commitment, and faith. While external threats occur in each book, this is ultimately a story about internal threats—the audio playing in our own heads.

Tess Lee is a world-famous novelist. Her inspirational books explore people’s innermost struggles and the human need to believe that there is light at the end of the tunnel. Despite her extraordinary success, she’s been unable to find happiness in her personal life. Jack Miller is a federal agent who specializes in counterterrorism. After spending decades immersed in a violent world, a residue remains. He’s dedicated everything to his job, leaving nothing for himself. The night Tess and Jack meet, their connection is palpable. She examines the scars on his body and says, “I’ve never seen anyone whose outsides match my insides.” The two embark on a beautiful love story that asks the questions: What happens when people truly see each other? Can unconditional love change the way we see ourselves? Their friends are along for the ride: Omar, Tess’s sarcastic best friend who calls her Butterfly; Joe, Jack’s friend from the Bureau who understands the sacrifices he’s made; and Bobby and Gina, Jack’s younger friends who never fail to lighten the mood. Along the way, others join their journey: the female president of the United States, with whom Tess bakes cookies and talks politics; the Millers, Jack’s childhood family; and many others. Celestial Bodies is about walking through our past traumas, moving from darkness to light, learning to live in color, and the ways in which love—from lovers, friends, or the art we experience—can heal us. Written as unfolding action, this collection moves fluidly between melancholy, humor, and joy. It can be read for pleasure or selected for book clubs.

Tess removed her coat and shoes as Jack locked the door. He kicked off his shoes and threw his jacket on the countertop. He came up behind Tess, put his hands around her waist, and she turned to face him. Without a word, they started to kiss passionately. He picked her up, carried her to the bedroom, and put her down on the edge of the bed. They both pulled their shirts off. Jack grabbed a pillow and placed it behind Tess. He lay her down, pulled off the rest of her clothes, and took off his own. Starting at her feet, he gently kissed her, and worked his way up her body. Soon, they were making love, screaming in bliss. After, they lay beside each other, kissing. Jack pulled a blanket over them.

“I’m so happy. I’ve never felt anything like this before.”

“Why don’t you move in with me? I want to wake up each morning with you and fall asleep in your arms each night.”

“I’ve never been more serious in my life. I love you with my whole heart. Marry me.”

Patricia Leavy, Ph.D., is a bestselling author. She was formerly Associate Professor of Sociology, Chair of Sociology and Criminology, and Founding Director of Gender Studies at Stonehill College in Massachusetts. She has published over thirty-five books, earning commercial and critical success in both fiction and nonfiction, and her work has been translated into many languages. Patricia has received dozens of accolades for her books. Recently, her novel Shooting Stars won the 2021 Independent Press Award Distinguished Favorite Contemporary Novel, her novel Film won the 2020 American Fiction Award for Inspirational Fiction, the 2021 NYC Big Book Award for Chick-Lit, and the 2021 Independent Press Award Distinguished Favorite Chick-Lit, her 3-novel set Candy Floss Collection won the 2020 American Fiction Award for Anthologies and the 2021 NYC Big Book Award for Anthology, and her novel Spark won the 2019 American Fiction Award for Inspirational Fiction, the 2019 Living Now Book Award for Adventure Fiction, and the 2021 National Indie Excellence Award for New Adult Fiction. She has also received career awards from the New England Sociological Association, the American Creativity Association, the American Educational Research Association, the International Congress of Qualitative Inquiry, and the National Art Education Association. In 2016 Mogul, a global women’s empowerment network, named her an “Influencer.” In 2018, she was honored by the National Women’s Hall of Fame and SUNY-New Paltz established the “Patricia Leavy Award for Art and Social Justice.” She lives in Maine with her husband, daughter (when she’s not away at college), and her dog. Patricia loves writing, reading, watching films, and traveling.

One randomly chosen winner via rafflecopter will win a $50 Amazon/BN.com gift card.

Enter to win a $50 Amazon/BN GC - a Rafflecopter giveaway