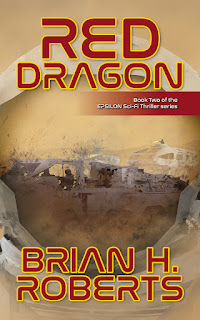 How do you fight a hidden adversary on Mars?

Dallas Gordon’s miners keep disappearing. Back on Earth, general Zhang Aiguo has seized control of the Chinese military and declared himself emperor.  His forces have secretly dispatched to the Red Planet to plunder EPSILON’s hard-won treasure.

Time is running out. Can Dallas Gordon and the Prospector team find Zhang’s hidden bases before they are all killed?

Allie stood in the shop doorway, her eyes wide as saucers.

Dallas looked up from the shop bench, saw the panic in her eyes, and started toward the door. He briskly accompanied her to the common room.

“Tell me everything you know.”

Allie spoke in a torrent, “I compiled the latest welfare check just five minutes ago. The drill rig was still parked at Site 7. Dave and Number Two were positioned a hundred yards to the northwest of the drill rig. Dave’s heart rate, respiration and core temp were all nominal. Radio check was normal, using MGPS comm band.”

Allie sat down hard at the communication console.

“I no sooner sent the report to you and Doc when I looked up at the MGPS locator map and saw this!”

She stabbed an index finger at the display. Dallas followed her extended finger to the screen. A solid X labeled “Drill Rig” occupied the center of the screen. Three inches higher and to the left, another X was labelled “Site 7.” Other than topographic contour lines, the screen was blank.

Dallas ordered, “Show me where Dave and Number Two were located when you compiled the welfare report.”

Allie’s finger slid a few inches higher and to the left, then hovered over the X at Site 7. In his first life, Brian worked as a contractor and civil engineer in bustling Seattle. Desiring a change, he and his wife traded big city life for the outdoor adventures of Central Oregon. His writing draws deeply on his lifelong loves of science/technology and adventure sports. His EPSILON Sci-Fi Thriller series now boasts two novels: Red Dragon and Crimson Lucre.

This was a great read from start to finish! Mr. Roberts creates a world that takes you in immediately. For someone who sometimes has trouble staying in the story when Sci-Fi stories get too technical, I can happily say that didn't happen with Red Dragon. The momentum doesn't stop, and each character has me wanting to know more of their stories, their lives in this world. Smartly written, and intriguing, I cannot wait for more from this author and series!.

Brian H. Roberts will be awarding a $75 Amazon GC to a randomly drawn winner via rafflecopter during the tour.

Enter to win a $75 Amazon/BN GC - a Rafflecopter giveaway